You are here: Home / At Large / I is for International Imbroglio

Starting this is hard. I promised to have this done by Sunday night, and here it is Saturday night and 20 words down. I needed a deadline to actually produce, so I told Matt Sunday night. So here I am, the wife and baby asleep, trying to produce.Matt asked me what I was going to write about. “Something geopolitical,” I said. Smart sounding way a of saying I’m not sure. “Something geopolitica,l” it can really cover an endless body of blathering, as I hope we will soon find.

Maybe an introduction first, I’ve been on the boards but this is my first story. My name’s Joshua. 34, married 7 years, one daughter. Professional journalist, photojournalist in detail. Been in “the business” 8 years, now working at a daily newspaper in the Baltimore/DC area. No, not that one. Not that one either. The plan was to slowly move up the ladder and land at one of the big guys, then sit back and work for thirty years. It seems, however, that when I wasn’t looking the ladder had caught fire and maybe it wasn’t going as high as we were led to believe in the first place.

Which brings us to The Dagger. I used to work with Brian and Matt and Kristi at a newspaper, a good newspaper. I like to think we worked hard, and at the end of the day I hope at least we did no harm. One of the best parts of the day was sitting around and just talking about the news. Not what we’d write or photograph, but what we thought. What was funny about a council meeting, the way that a politician you’d spent months hammering would make a joke and suddenly become a real person in front of you. Awkward press conferences, with bold faced liars promising the moon and the stars when they knew that we knew it was all bullshit. Public meetings, where some housewife would stand up and crystallize exactly what everyone else was trying to avoid talking about. The odd connections between stories, how the players and motivations would change depending on where you were looking at it from that day. We’d talk about all of this and eventually someone would say that thats the kind of stuff we should be covering. Maybe one day, someone else would say.

Now here we are, a little older and in way over our heads. We’re in charge, and I still haven’t written anything geopolitical, which by the way I’ve misspelled on the first try every single time I’ve typed it.

So, the reason you’re reading a photographer attempt writing is pretty simple. From where I’m sitting, the world’s fucked up. It’s a mess. A real, rolling, smoking mess of potentials and opportunities, losses and chaos. It feels out of control, it makes me feel out of control. Somedays I look around, and I can almost see the bedrock of our world cracking, I can hear it creak. I’m talking everything, politics of course, war and business, art and media, jobs, everything is showing the strain. That’s what I’m going to be aiming for, try and pin it down a little, point out some connections that maybe aren’t being talked about. Worry the strings a little bit. It’ll be geopolitics today, just to warm up. I’m also aiming to get you into it, so comment or flame away. I’m not trying to make you angry, but I will if you’d like.

Pakistan is as good a place to start as any, isn’t it? As of tonight General Pervez Musharraf has promised elections, why shouldn’t you believe a man who disbanded

the courts and placed his chief rivals under house arrest. The joke’s always been that killing the lawyers would be a good start. Actually seeing suit and tie lawyers battling police in Islamabad last week wasn’t funny at all. That’s about the worst thing you can see. Not much further to fall after that. It could not be any worse news for the people of the Middle East, and it could almost not be any worse news for us.

And why, one asks, do we care particularly about Pakistan? Because of its proximity to Afghanistan and its aid in the war with their Islamic fundamentalists? Well, not really. That’s the story, but it’s getting old. The only aid in the war they appear to be giving us is to not be fighting against us. Yet. So, what’s my hare brained theory? I’m glad you asked.

In this case, the I’s have it. The first I is Pakistan’s neighbor to the south, the country we call India. Not in ANY coverage of the current Pakistani crisis have I seen one mention of India, and they are the eight armed elephant in the room. India and Pakistan don’t get along, you see. First, there is a key piece of territory they both claim, Kashmir, situated right along the border. They’ve been fighting over it for a long, long time. It’s more natural for them to be fighting over it then not. Secondly, lets throw in the incredible clash of the two (at least two) religious cultures at play, Islam and Hindu. There’s a fight that’s been going on for a long, long, long time.

We do not want a war between India and Pakistan. They both have nukes. If the holocaust of literally millions of deaths doesn’t grab you, we need India. They’re big players now, like it or not, and our economy is dependent on their economy. A crashing, warring India leaves us swaying in the wind. China doesn’t want that war either. Russia might, but that’s for another article.

The second I is a name we’re hearing daily lately, Iran. Iran is an Islamic fundamentalist country, a country that appears to have its house in order. They are Pakistan’s neighbors to the east, another fact left out of most coverage. They probably don’t need nuclear bombs going off on their border, but I would guess they would love to see another Islamic fundamentalist neighbor. They appear to feel really threatened by the west, and could tip an Islamic revolution in Pakistan similiar to the one that was their genesis. We have very real reasons for not wanting that. Now, is Iran an actual threat to us? That’s a dicey question, and deserves its own article. But they are most certainly a threat to our last I, the wild card in this deck of faith and apocalypse.

Israel. It always comes back to Israel. Never mentioned in the stories about Pakistan, or Iran, or Iraq for that matter. We talk about the intifada and the Palistinians, sure, but what about the Israeli connection to the rest of the middle east? Now, I’m not talking the usual line about Zionist conspiracies or the Illuminati. For the record, because people love to know, I am Jewish. I’m talking about pure military strategy here.

Israel believes that its survival depends on being able to fight and defeat the Arab world. 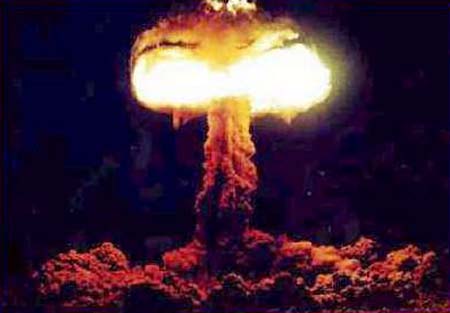 And they might be right. Their short history is proof of that, dozens of wars and skirmishes with the entire Arab world. They must believe that an Islamic fundamentalist government in Pakistan is a direct threat to their existence, because of the nukes. They cannot let that happen, and when Israel decides to act they do. We all seem to have forgotten how in 1981 Israeli plane destroyed nuclear facilities in Iraq. The people who did that? They’re still in charge there. That’s how we know Iran doesn’t have nukes.

Because if they did, the second they did Israeli planes would be bombing them. How might Israel react to a religious revolution in Pakistan? Not in any way we’d want to see. How would the rest of the Islamic world react to Israel taking such a step? Ditto.

It seems, at heart, despite recently starting a small war, the goal of the west is to avoid the big war. We’re standing with our arms held out, trying to keep everybody apart and alive. And Pakistan is a nightmare.

Do we support an oppressive dictator who jails his opponents and suspends justice, or do we try and force democracy to run its course? And likely end up, like in Palestine with Hamas, with exactly what we are most afraid of staring back at us?